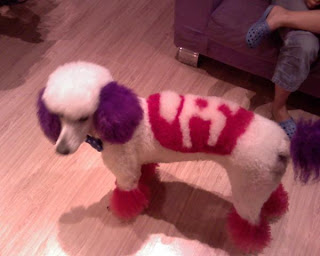 Sent from my Windows Mobile® phone. 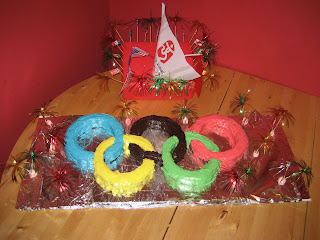 08-08-08! The Beijing Olympics are here. We had some friends over last night to watch the opening ceremony. It was really fun and festive! Madison has been bragging all day that she stayed up until 12 midnight last night...I guess she should be...it was the first time for that. She was insistent on seeing the Torch (since we hyped it up and she didn't get to see it when it came through here) so we let her stay up. A friend and I made an Olympic ring cake. I was inspired to make it because my good friend Ginger had an Olympic ring cake for her 8th birthday. I'm sure it doesn't compare to Ms. Marci's cake (Ginger's mom), but we gave it the good ole' college try.
Posted by Sonya at Saturday, August 09, 2008 1 comment:

No Torch for us! 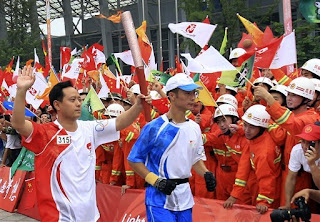 We tried! We got up and out the door really early (for us), and off to see the Torch. From the minute we left our complex you could tell there was something special going on. People were in a bit of a festive mood wearing their "I Love China" T-shirts and waving their Olympic flags. I guess we all had the same idea. Once we got to the area where we thought the torch was to be, we started seeing police everywhere! They were literally everywhere! They had all the roads blocked to cars, bike, and pedestrians all around the area. I got out of the car twice with Madison to see if we could charm a cop...he just said, "There are too many people there. It's not safe for her. You should go home and watch it on TV." That is basically what the other officers said too. I don't think we ever got anywhere near the Torch....we were at least 2-3 miles from it at our closest. The security was unreal and only the people that were invited to attend were there. I guess if we had stayed home, we would have at least seen the Torch while it was in our city. Oh, well!
Posted by Sonya at Thursday, August 07, 2008 No comments:

The Olympic Torch is making it's last stop before going to Beijing in our city! It's not because we live right next to Beijing. It is because the Chinese government wants to show their support to the earthquake region. Anyway, I've been doing my research on where is it going to be and when. They are trying to keep the details of the torch's whereabouts on the down low, but I'm intent on getting the scoop. We know it is going to come through her tomorrow, but just don't know exactly where and when. I'm planning to dress my kids in their "I Love China" shirts with Olympic flags in hand, and hope the guards will let the cute little foreign kids in to see the Olympic Torch. (For those of you who live here or have visited, you know that 1 little foreign kid is hard for anyone to resist...so 3 in "I Love China" T-shirts will be simply irresistible...or at least I hope so.)
Posted by Sonya at Monday, August 04, 2008 No comments: