Well, while we are waiting on Lily I have been trying to get her new room decorated.  I’ve been really proud of all my inexpensive ways to convert our guest room into 2 little sisters’ bedroom.  I have lots of pictures of the entire room, but I’m not quite ready to unveil it.

This is one of those examples of something you see everyday in the U.S., but I’ve never seen here.  OK…enough already…Sydney and Lily’s monogram on their new wall: 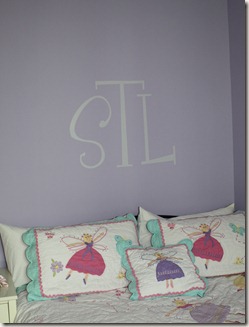 I had been trying to figure out how to put their monogram on their wall for awhile.  I knew I wouldn’t be painting it.  I had considered ordering it on Etsy and having someone bring it in, but that just seemed like a pain and I didn’t want to spend the money.  Then I thought I would try one of our local print shops and see if they could do it.  (For those of you picturing Kinko’s, you should scratch that imagine, because our “local print shop” looks nothing like that.)  Anyway, this afternoon I walked over to the print shop and explained to them what I wanted.  I showed the lady where to download the font I wanted and 10 minutes later I was walking home with my wall art.  I immediately called my very artistic friend, Lori, and asked her if she could help me hang it. 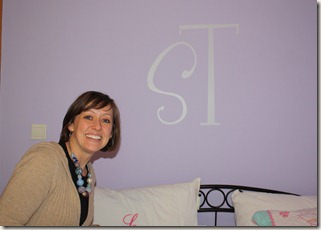 She came right over and 15 minutes later I had a cute monogram on the wall, and was on my way to pick up the big girls from school.

This is one of the things that actually turned out to be easier and much cheaper than it would have been in the States.  I think I’ve found a new hobby and will be creating some new things with my new find. 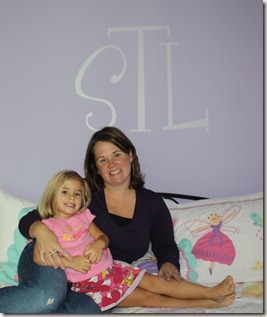 I promise I will post pictures of the entire new room soon.  As far as a Lily update goes, we are trying to wait patiently for our Travel Approval.  Once we have our TA we will be heading to pick Lily up!!!  We are really hoping that we will be able to pick her up in about 2 weeks!  Stay tuned for pictures of her new room…and hopefully, news that we have received our Travel Approval!

9 months pregnant with no due date

That is what I feel like these days. I feel like I’m hugely pregnant but have no idea when we may meet our new little baby.

We have one more grueling step before we can go pick up Lily.  We are waiting for our last documents from the US government to be delivered to the CCAA in Beijing so they can issue our Travel Approval.  Once we have the TA was can go pick up Lily!!!!  A week or so ago there were some reports of other adoptive families getting their TA’s in 4 days!  This process usually takes 2-3 weeks, so I started freaking out about not having things done.   So, last week I started thinking we may get Lily on November 1st or the 8th…now I’m thinking it may be more like the 15th.  Either way, I’m dying!

In the meantime, we have converted our guest room into Sydney and Lily’s new room.  It is super cute (I’ll post pictures soon) and our family had a great time working on it.  It is just sitting empty waiting on those cute little sisters to occupy it.  (It will actually be awhile before they move into it, since Lily will sleep in our room for awhile to help her attach to us.)

I’ve also been trying to decide what size clothes Lily will wear and then get out what i think will fit her.  Based on the measurements we have been given (which may or not be accurate), I think she may be wearing 18 months clothes.  After checking with others who have adopted children from China, I think that may be a pretty generous guess…I think she may actually be wearing 12 month clothes.  Who knows?!

These are just a sampling of the questions that fill my mind and heart every moment of the day.  Praying she comes quick…I don’t think I can wait much longer!
Posted by Sonya at Tuesday, October 19, 2010 2 comments:

A few weeks ago we had the privileged of meeting 2 people who we have known and been working closely with for the past 10 months…the President and China Director of our adoption agency. They were in China meeting with their staff and holding some seminars in various cities about adoption for expats.  We have been so satisfied with our experience with them that we invited them to come to our city to do one of their seminars. 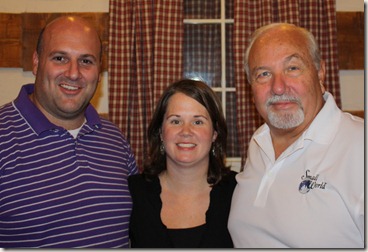 On my way to pick them up for dinner, it hit me that i felt like i was going on a blind date.  Travis was coming directly from work so it was just me going to pick them up.  The thing much different about this “blind date” was that they already knew everything about us…and i do mean everything!

We had a fantastic time with Jim and Josh Savley at dinner and then at the adoption seminar.  It was great to have so many other expat families attend and be very interested in growing their families by adoption. 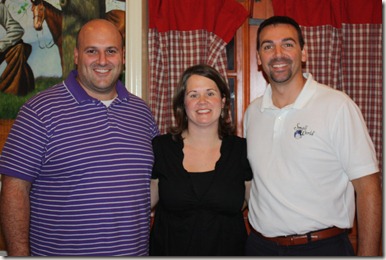 The following night our whole family went with them to dinner again.  The girls had fun meeting them and knowing that they are the people who introduced us to Lily.
Posted by Sonya at Sunday, October 10, 2010 No comments:

Another major part of the holiday is to give and eat mooncakes.  Most people don’t even really like them, but just have fun being apart of the tradition of giving and eating  them. 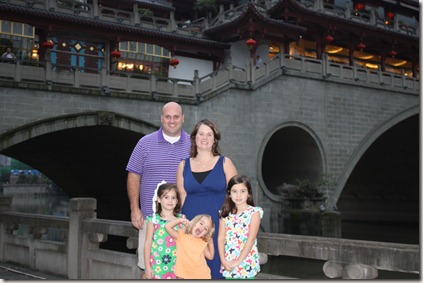 This year we went with some new friend to a restaurant near the center of the city that is actually on a bridge.  We only managed to get a few pictures before our battery went dead. 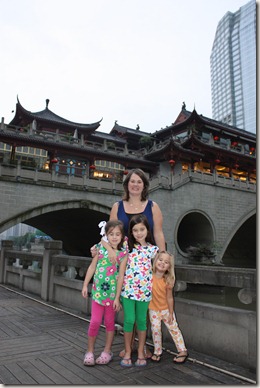